Waitangi
Welcome to New Zealand’s most important historic site. The Waitangi Treaty Grounds are an absolute must-do while in the Bay of Islands – they’re steeped in history and home to a multitude of stories of the momentous events which shaped our nation.

The Treaty Grounds feature the Museum of Waitangi, the Treaty House, the carved Meeting House and the world’s largest ceremonial waka (war canoe).

Guided tours and cultural performances are available daily and are recommended highly. ‘Hāngi (food cooked in an underground pit ‘oven’) & Concert’ evenings are offered in summer. A gift shop and cafe are situated in the grounds. An introductory film screens in the visitor centre every 30 minutes. 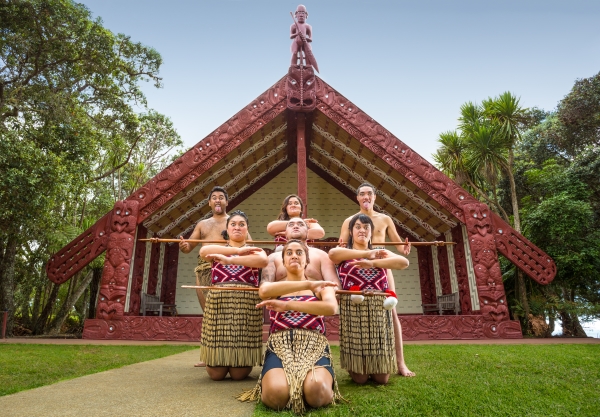 There are Bay of Islands day tours to suit every traveller. Go swimming with dolphins, see the natural wonder that is the Hole in the Rock on an island cruise, and enjoy spotting all kinds of birds and marine life from the boat – whales, dolphins, seals and penguins are all frequent visitors.

Visit historic Russell, today a charming historic village of boutique shops and eateries but once a lawless open port known as the ‘Hell Hole of the Pacific’.

From Paihia you can take a tour to Cape Reinga at the very tip of New Zealand and see the spot where the Tasman Sea and Pacific Ocean collide, and from where Māori legend holds that departed spirits leave on their journey to their homeland.

During your tour you’ll drive along the sand on spectacular Ninety Mile Beach, sand-surf down giant dunes (if you’re feeling adventurous) and see ancient native kauri trees in the Puketi Forest.

Enjoy a relaxing journey through some of New Zealand’s earliest settlements on the Twin Coast Cycle Trail, or Pou Herenga Tai.

The trail is generally flat and wide with a smooth surface and only gentle climbs. It includes off-road and on-road riding.

The off-road section is built on an old rail corridor, making it suitable for riders of all ages, abilities and fitness levels.

The trail traverses rural farm country and takes the rider through a number of small towns and past many sites of historical and cultural significance.

Look out for the hand-carved pou (statues) along the route. These reflect the rich culture of this region and provide an artistic feature to the trail.

Some sections of the trail are open while others are still under planning and construction. It’s anticipated that the entire 84km trail, from Opua to Horeke, will be completed in summer 2016.

The Stone Store was built in 1832 from sandstone, local volcanic rocks and burnt shell mortar. Over the years it has been a trading post, a library, a barracks and a boys’ school. The building has operated as a general store since the 1870s and today offers a range of authentic trade goods similar to those first traded in the early 19th century, along with a quirky range of uniquely New Zealand merchandise.

Pompallier Mission was a saintly enclave in the most sinful site of the southern seas, where French Catholic brothers translated the Church Latin of religious texts into te reo Māori, printed them, and bound them into beautiful books. All while the country was becoming a British colony.

Located only five minutes’ walk from the Russell wharf, on the waterfront in the stunning Bay of Islands, Pompallier Mission is today New Zealand’s only surviving pioneer printery and tannery. Here you can learn how to tan a hide, bind a book and more.

Built in 1842 in a traditional French rammed-earth style (pisé de terre), Pompallier Mission gives visitors a hands-on experience of the lives and times of pioneer missionaries caught up in British treaty-making and in the war between Māori and European settlers.